I originally started to write a post on a memorization technique I’m using for the unit circle, and went looking for representative jeremiads both pro and con. Instead, I found Ben Orlin’s piece When Memorization Gets in the Way of Learning (from five years back):

…which is the opposite of a standard, boring piece and serves as a good counterpoint to explain some recent shifts in my pedagogy.

It’s a good piece. In many ways, the debate about memorization runs parallel to the zombie problem–students regurgitate facts without understanding. Ben’s against that. Me, too. Ben says that testing requirements create tensions between authentic learning and manageable tests; I have various means of ensuring my students understand the math rather than just hork it up like furballs of unknown origin, so am less concerned on that point.

But I don’t agree with this sentiment as much as I probably did a decade ago: Memorizing a list of prepositions isn’t half as useful as knowing what role a preposition plays in the language.

Not in math, anyway.

A couple years ago, after I’d taught trigonometry two or three times, I suddenly noticed that at the end of the year, my students were very fuzzy on their unit circle knowledge. (It’s no coincidence that Ben’s article and my observations are both focused on trigonometry, a branch of math with a significant fact base.) When working trig equations, they’d factor something like the equation above, use the Zero Product Property, solve for sin(x)…and then stop.

Shrug. No recognition. My tests are cumulative. Many students showed significant recall of concepts. They were using ratios to solve complex applications; they were sketching angles on the coordinate plane–both concepts we hadn’t revisited in months. They could sketch the unit circle from memory and eventually figure out the answer. But they had no automatic memories of the unit circle working backwards and forwards, even though I had emphasized the importance of memorizing it.

Upsetting, particularly at the end of the year. The name of the class is Trigonometry, after all. Solving for sin(x) requires not one tiny bit of trig. It’s all algebra. Trigonometry enters the picture when you ask yourself what angle, in radians or degrees, has a y to r ratio of 1 to 2.

The sine of π/2 is not among [the important things to memorize]. It’s a fact that matters only insofar as it connects to other ideas. To learn it in isolation is like learning the sentence “Hamlet kills Claudius” without the faintest idea of who either gentleman is–or, for what matter, of what “kill” means.

Well, okay, but….if a student in a Trig class can’t work a basic equation without a cheat sheet, what exactly has he learned? He already knew the algebra. Does the same standard hold for SOHCAHTOA, or can I still assume the student has successfully learned something if he needs a memory aid to remember what triangle sides constitute the sine ratio? What else can be on the cheat sheet: the Pythagorean Theorem? The ratios of the special rights?

Ben describes memorization as learning an isolated fact through deliberate effort, either through raw rehearsal or mnemonics, both of which he believes are mere substitutions for authentic learning. He argues for building knowledge through repeated use.

Sure. But that road is a hard one. And as Ben knows much better than I, the more advanced math gets, the more complex and numerous the steps get. Most students won’t even bother. Those who care about their grades but not the learning will take the easier, if meaningless route of raw rehearsal.

So how do you stop students from either checking out or taking the wrong road to zombiedom?

I’ve never told my students that memorization was irrelevant, but rather that I had a pretty small list of essential facts. Like Ben, I think useful memorization comes with repeated use and understanding. But what if repeated use isn’t happening in part because of the pause that occurs when memory should kick in?

So I’ve started to focus in on essential facts and encouraged them to memorize with understanding. Not rote memorization. But some math topics do have a fact base, or even just a long procedural sequence, that represent a significant cognitive load, and what is memorization but a way of relieving that load?

The trick lies in making the memorization mean something. So, for example, when I teach the structure of a parabolas, I first give the kids a chance to understand the structure through brief discovery. Then we go through the steps to graph a parabola in standard form. Then I repeat. And repeat. And repeat. And repeat. So by the time of the first quiz, any student who blanks out, I say “Rate of Change?” and they reflexively look for the b parameter and divide by 2. Most of them have already written the sequence on their page. The memorization of the sequence allows them repeated practice.

But it’s not mindless memorization, either. Ask them what I mean by “Rate of Change”, they’d say “the slope between the y-intercept and the vertex”. They don’t know all the details of the proof, but they understand the basics.

I take the same approach in parent function transformations, after realizing that a third of any class had drawn parent functions for days without ever bothering to associate one graph’s shape with an equation. So I trained them to create “stick figures” of each graph:

I drew this freehand in Powerpoint, but it’s about the same degree of sloppiness that I encourage for stick figures. They aren’t meant to be perfect. They’re just memory spurs. Since I began using them a year ago, all my students can produce the stick figures and remind themselves what graph to draw. They know that each of the functions is committed on a line (to various degrees). Most of them understand, (some only vaguely), why a reciprocal function has asymptotes and why square root functions go in only one direction.

So did they learn, or did they memorize?

I haven’t changed my views on conceptual learning. I believe “why” is essential. I’m not power pointing my way through procedures. I am just realizing, with more experience, that many of my students won’t be able to use facts and procedures without being forced to memorize, and it is through that memorization that they become fluid enough to become capable of repeated use.

Like Ben, I think a zombie student with no idea that cosine is a ratio, but knows that cos(0) = 1, has failed to learn math. I just don’t think that student is any worse than one who looks at you blankly and has no answer at all. And addressing the needs of both these students may, in fact, be more memorization. Both types of students are avoiding authentic understanding. It’s our job to help them find it.

So I’ll give an example of that in my next post.

Homework: The Rules that Matter

While reading another carefully worded propaganda blast on the value of  homework, I thought of Pirates of the Caribbean, a splendid film that I’d remembered recently for my ELL class.

Research on homework, and debates about research on homework can’t really be taken seriously. It’s all more what you’d call guidelines than actual rules. But the fundamentals of homework are very much a cascading series of Jack Sparrow’s “two rules that matter“. For high school, anyway–and if it’s not high school or beyond, it doesn’t matter.

So as long as we’re just hanging here, pay attention. The only rules that really matter are these: 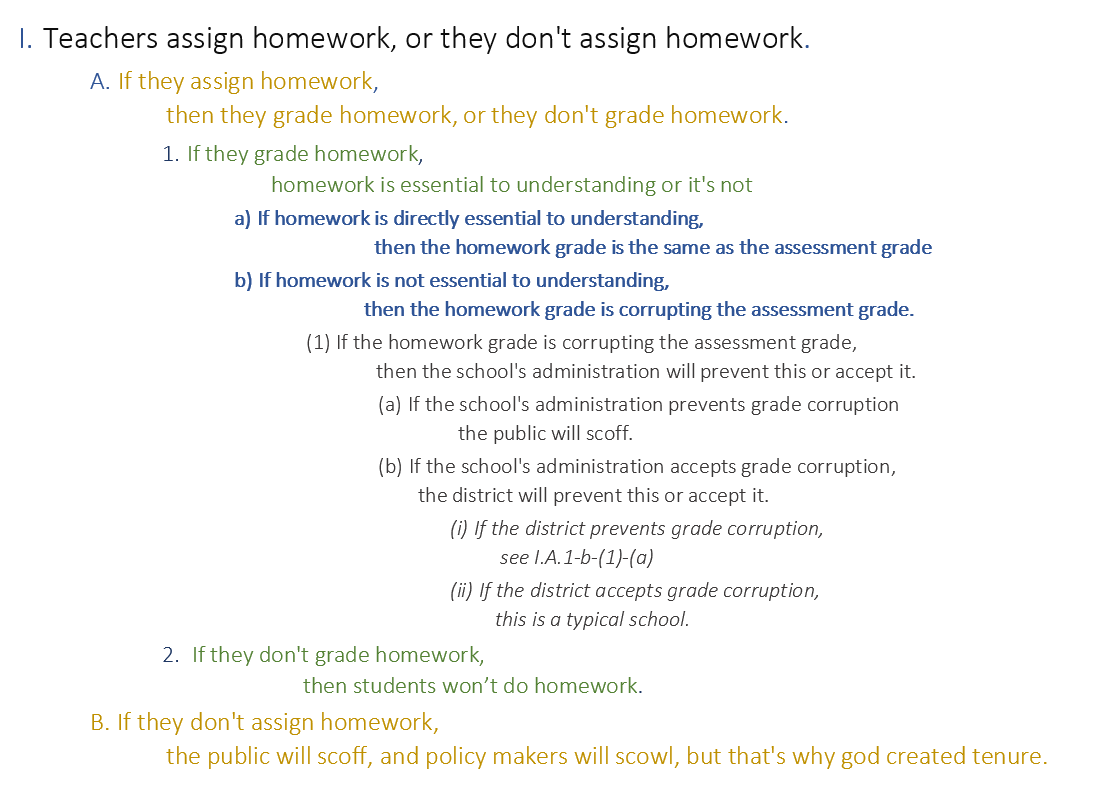 “Homework” is practice, work that is assigned with the intent to improve fluency and understanding. Math homework is the most common sort, but there are also science lab notes, reading textbook notes, those idiotic shoebox assignments, collages, or any other sort of out-of-school activity that isn’t formal written expression or assessment.

“Corrupted” is a strong word for grading that is very much standard procedure in most high schools nationwide, but appropriately dramatic given the degree to which grades are used as a proxy for ability. Many teachers would be upset at this description of their usual practice; in this conversation of mostly college-level instructors, most of the participants acknowledge that many students do well on tests, but flunk or get a much lower grade because they don’t do the homework.  Others point out how absurd this is. At the high school level, far fewer are found in the second group.

Teachers have a wide, legally enforced latitude in grading, but districts and schools can institute policies that reduce options. Overwhelmingly, these policies take place in low income schools, where the students shrug off the Fs and the failure rates affect the graduation rates. District and school efforts to protect students from low grades due to homework take the shape of  forced incompletes,  banning zeros and sometimes banning graded homework altogether.  And the public always scoffs. Lazy kids these days.

District or school-imposed restrictions are not to be confused with parent-initiated drama fests about homework overload.

The research on homework almost all focuses on two questions: does homework improves academic performance? How much homework are students doing? (The latter issue, in particular, has been annoying American parents for decades.)

I’m not…terribly interested in either of those questions. The first, which most consider quite important, is specifically in conflict with a teacher’s responsibility to grade accurately. No one would ever assume that homework improvement is anything other than relative to student ability.

And so  they shouldn’t.

I don’t do homework, and this isn’t the first time I’ve written about the primary damage done by homework’s corrupting impact on grades.

Grades, really, are the main issue. Grades in America are simply junk. I can’t stress this enough.  Research–never mention a moment’s reflection–reveals that in  Title I schools like mine, an A denotes a much lower performance than at a high-income high school.

No one’s interested in adequately assessing student merit across classrooms, much less school districts, much less cities, states, or countries, so laugh at anyone who declares passionately that Harvard and other private universities are discriminating against more worthy claimants, Asian or otherwise.  No one knows who the worthy claimants are, and no one’s interested in finding out.

But that’s a topic for another day.