Teaching Objective: Introduce radian as a unit of angle measure that corresponds to the number of radians in the length of the arc that the angle “subtends” (cuts off? intersects?).  Put another way: One radian is the measure of an angle that subtends an arc the length of the circle’s radius.  Put still another way, with pictures:

How do you  engage understanding and interest, given this rather dry fact?  There’s no one answer. But in this particular case, I use stagecraft and misdirection.

I start by walking around a small circle.

“Really? I walked the same distance both times?”

“So what’s the difference?”

It takes a minute or so for someone to mention radius.

“Hey, there you go. Why does the radius matter?”

That’s always an interesting pause as the kids take into account something they’ve known forever, but never genuinely thought about before–the distance around a circle is determined by the radius.

“Yeah. Of course, we knew that, right? What’s that word for the distance around a circle?”

“Yes. And how do you find the circumference of a circle?” There’s always a pause, here. “OK, let me tell you for the fiftieth time: know the difference between area and circumference formulas!”

“2Πr” someone offers tentatively.  I put it up:

“Look at the equation. 2 Π is 2 Π. So the only difference is radius. The difference in these two circles I walked is that one has a bigger radius.”

“So the real question is, how does the radius play into the circumference?”

“Well,” it’s always one of the better math students, here: “The bigger the radius is, the farther away from the center, right?”

“So then…you have to walk more around…more to walk around,” some other student will finish, or I’ll ask someone to explain what that means.

“Right. But how does that actually work? Can we know exactly how much bigger a circle is if it has a bigger radius?”

I pass out pairs of circles, cut from simple construction paper, of varying sizes, although each pair has the same radius.

“You’re going to find out exactly how many radius lengths are in a circle’s circumference using the two circles. Don’t mix and match. Don’t write annoyingly obscene things on the circles.”

“How about obscene things that aren’t annoying?”

“If you can think of charmingly obscene comments, imagine yourself repeating them to the principal or your parents, and refrain from writing them, too. Now. You will use one of these circles as a ruler. All you have to do is create a radius ruler. Then you’ll use that ruler to tell me how many times the radius goes around the circumference.”

“Use one of the circles as a ruler?”

“You figure it out.”

And they do. Most of them figure it out independently; a few covertly imitate a nearby group that got it. Folding up one of the circles into fourths (or 8ths) exposes the radius.

Folding up one circle exposes the radius.

It takes most of them a bit more time to figure out how to use the radius as a ruler, and sometimes I noodge them. It’s so low-tech! 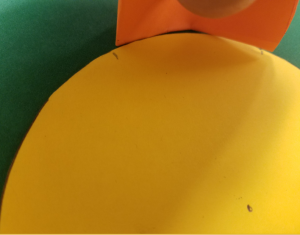 Curl the folded circle around the edge of the measured circle.

But within ten to fifteen minutes everyone has painstakingly used the “radius ruler” to mark off the number of radius lengths around the circumference, and then I go back up front.

“Okay. So how many times did the radius fit into the circumference?”

Various choruses of “Over six” come back, but invariably, someone says something like “Six with and a little bit left over.”

“Hey, I like that. Six and a little bit. Everyone agreed?” Yesses come back. “So did everyone get something that looks like this?”

“Huh. And did it matter what size the circle was? Jody, you had the big two, right? Samir, the tiny ones? Same difference? Six and a little bit?”

“So no matter the circle size, it appears, the radius goes into the circumference six times, with a little bit left over.”

No one has any clue where I’m going, usually, but they’re interested.

Pause, as the import registers, then “Six divided by two.”

“Yeah, it’s a division question! So when I ask how many times the radius goes into the circumference, I’m actually asking…..” The pause is a fun thing. Most beginning teachers dream of using it, but then get fearful when no one answers. No. Be fearless. Wait longer. And, if you need it:

“Oh, come on. You all just said it. How many times does 2 go into 6 is 6 divided by 2. So how many times the radius goes into the circumference is…”

and this time you’ll get it: “Circumference divided by the radius.”

“Yeah–and that’s interesting, isn’t it? It applies to the original formula, too.”

“Cancel  out the radius.” the class is still mystified, usually, but they see the math.

“Right. The radius is a factor in both the numerator and denominator, so they can be eliminated. This leaves an equation that looks like this.”

(Note: I have never had the experience where a bright kid figures it out at this point. If I did, I would kill him daid, visually speaking, with a look of daggers. YOU DO NOT SPOIL MY APPLAUSE LINE. It’s important. Then go to him or her later and say, “thanks for keeping it secret.” Or give kudos after the fact, “Aman figured it out early, just two seconds before figuring out I’d kill him if he spoke up.” Bright kids learn early, in my class, to speak to me personally about their great observations and not interrupt my stagecraft.)

And then, almost as an aside: “What is Π, again?” I always ask it that way, never “what’s the value of Π” because the stronger kids, again, will answer reflexively with the correct value and they aren’t the main audience yet. So the stronger kids will start talking yap about circles, and I will always call then on a weaker kid, up front.

“So, Alberto, you know those insane posters going around all the math teachers’ walls? With all the numbers?” 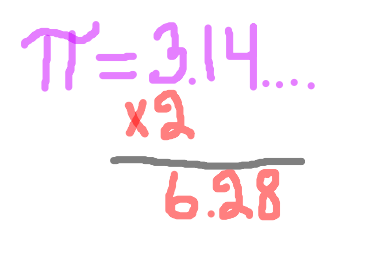 “SIX AND A LITTLE BIT!” the class always shouts with joy and comprehension. And on good days, I get applause, too, from the stronger kids who realized I misdirected them long enough to get a deeper appreciation of the math, not just “the answer”.

So a traditionalist would just explain it, maybe with power point. I don’t want to fault that, but I have a bunch of students who would simply not pay any attention. They’ll take the F. I either have to figure out a way to feed them the math in a way they’ll remember, or fail more kids than I’m comfortable failing.

A discovery-oriented teacher would probably turn it into a crafts project, complete with pipe cleaners and magic markers. I don’t want to fault that, but you always get the obsessive artists who focus on making a beautiful picture and don’t care about the math. Besides, it takes forever. This little activity has to be 15-20 minutes, tops. Remember, there’s still a lot to explain. Radians are the unit measure that allow us to talk about circles in terms akin to similarity in polygons–and that’s just the start, of course. We have to talk about conversion, about the power that radians gives us in terms of thinking of percentage of the entire circle–and then actual practice. I don’t have time for a damn pipe-cleaning activity.

As I’ve written before somewhere between open-ended, squishy discovery and straight discussion lecture lies a lot of ground for productive, memorable teaching. In my  opinion, good teachers don’t just transmit information, but create learning events, moments that all students remember and can use as hooks for further memories of learning. In this case, I want them to sneak around the back end to realize that  Π is a concrete reality, something that can actually be counted, if not exactly.

Teaching as stagecraft. All the best teachers use it–even pure lecture artists who do it with the power of their words (and an appropriate audience).  Many idealistic teachers begin with fond delusions of an enthralled class listening as they explain math in terms that their other soulless, uncaring teachers just listlessly put up on the board. When those fantasies are ruthlessly dashed, they often have no plan B. My god, it turns out that the kids really don’t find math interesting! Who do I blame, myself or them?

I never had the delusions. I always ask my kids one simple question: is your life better off if you pass math, or if you fail?  Stick with me, and you’ll pass. For many, that’s a soulless promise. To me, that’s where the fun starts. How do you get them interested? How do you create those moments? How do you engage kids who don’t care?

But it’s a good way to start.

Teacher and tutor END_OF_DOCUMENT_TOKEN_TO_BE_REPLACED
This entry was posted on Saturday, November 26th, 2016 at 11:38 pm and tagged with radians, trigonometry and posted in engagement, pedagogy, teaching, Uncategorized. You can follow any responses to this entry through the RSS 2.0 feed.
« Celebrating Trump in a Deep Blue Land
In Which Ed Explains Induction »