In the 1973 decision Lau vs Nichols, the Supreme Court, ever vigilant to prove the truth of primer rule #5, ruled that schools had to provide “basic English support”:

Congress has been enforcing this decision for the past 40 years through various versions of the Bilingual Education Act. The law’s a joke, since states and districts have wildly varying tests and classification standards for ELLs, making metrics impossible but by golly, the schools collect the data and get judged anyway.

The 2016 Presidential candidates should call to end federal classification and monitoring of English Language Learners.

I mulled for weeks about this last of my highly desired but virtually unspeakable presidential education policy proposals—not because I couldn’t find one, but because the obvious fifth choice was so…old hat. I remember my swim coach bitching about bilingual education in the 70s. I’d lived overseas until then and when he explained this weird concept my teammates had to assure me he wasn’t kidding. The only thing that’s changed since then is the name.

And so I’ve been flinching away from finishing up this series because really? that’s the last one? After you called for restricting public education to citizens only, it’s the weak tea of English Language Learning?

Besides, someone will snark, if public education is citizen-only, then there’s no need to discuss ELL policy, is there?

Because the answer to that supposedly rhetorical question is: quite the contrary. Immigrants aren’t even half of the ELL population. 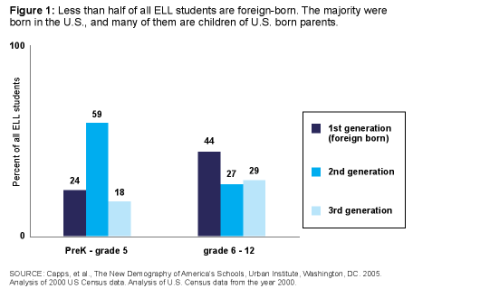 Citizens comprise from just over half to eighty percent of the ELL population, depending on who’s giving the numbers, but while the estimates vary, the tone doesn’t: no one writing about English language instruction seems to find this fact shocking.

Twenty percent of elementary school kids and thirty percent of middle and high school ELL students have citizen parents. Their grandparents were immigrants.

Pause a moment. No, really. Let that sink in. I know people who don’t think categorizing US citizens as non-native English speakers is, by definition, insane. I know people who would protest, talk about academic language, the needs of long-term English language learners (almost all of whom are citizens), and offer an explanation in the absurd belief that more information would mitigate the jawdropping sense of wtf-edness that this statistic invokes. But for the rest of us, this bizarre factoid should give pause.

Don’t blame bad parenting and enclaves, the Chinatowns and barrios and other language cocoons where English rarely makes an appearance. English fluency at time of classification is, to the best of our knowledge, unrelated to speed of transition. Those classified in kindergarten are going to transition out of ELL by sixth grade or they’re not going to transition, sez most of the hard data. No reliable studies have been conducted whatsoever on ELL instruction, so take any efficacy studies you learn of with a grain of salt.

Don’t sing me any crap songs about “native language instruction” or “English immersion” because I’ve heard them all and not one of the zealots on either side takes heed of the fact that neither method is going to make a dent in the language skills of a six year old born in this country who doesn’t test as English proficient despite being orally English-fluent.

Read any study on long term ELLs, the bulk of whom are citizens classified LEP since kindergarten, and it’s clear that most are fluent in oral English—that English is, in fact, their preferred language, the one they use at home with friends and family. They just don’t read or write English very well. And then comes the fact, expressed almost as an afterthought in all the research, that long-term ELLs don’t read or write any language very well.

Knowing this, how hard is it to predict that in California, 85% of Mandarin speakers are reclassified by 6th grade, yet half of all ELLs are not? That the gap within ELLs dwarfs the gap between ELLs and non-ELLs? That academic proficiency in the ELL student’s “native” language predicts proficiency in English?

While undergoing an induction review for my clear credential, the auditor told me that I hadn’t given enough support to my English Language learners.

“I didn’t have any issues with students and language,” I told him–the more fool I.

“You had ELLs in your classroom.”

“Sure, but most of them did very well and those who didn’t weren’t suffering from language problems. They just struggled with math, and I supported that struggle.”

“Yes. If an ELL is struggling in math, you must assume it’s language difficulties.”

“But I paid careful attention to my struggling kids, looking for every possible reason they could be having difficulties. Strugglers with and without ELL classification were indistinguishable. But I reduced the language load considerably for these students. You can see that in my section on differentiation.”

“Your differentiation is just varying curriculum approaches. I need to see ELL support. Let’s meet again in two days. That should give you enough time to re-evaluate your instruction.”

It didn’t take me two days. It barely took me two minutes. All I did was relabel my “Differentiation” section to to “Language Support”, demonstrating the many curricular changes I built to support my struggling students English Language Learners.

So here’s the dirty secret of ELL classification: Students fluent in English who are nonetheless classified as ELL are unlikely to ever reach that goal, because the classification tests are capturing cognitive ability and confusing it with language learning. All the nonsense about “academic vocabulary” and “writing support” is not so much useless as simply indistinguishable from the differentiation teachers use to support low ability students, regardless of language status.

Long-term ELLs in high school, fluent in English but not in writing or reading, are simply of below average intellect. That’s not a crime.

It’s also not worth calling out as a category. Unlike the uncertainty involved in maneuvering Plyler, there’s almost no legal uncertainty in ending federal mandates for bilingual instruction. Whatever the justices who wrote Lau vs. Nichols had in mind, they clearly were addressing the needs of students who spoke and understood no English at all. They were not concerned with language support to citizens orally fluent in English. If nothing else, ending this language support doesn’t count as “discrimination against national origin”, since they were born here.

Teacher and tutor END_OF_DOCUMENT_TOKEN_TO_BE_REPLACED
This entry was posted on Monday, August 31st, 2015 at 12:02 am and tagged with bilingual education, education spending, English immersion, English Language Learners, Hispanic students, immigrants, Lau vs Nichols and posted in politics. You can follow any responses to this entry through the RSS 2.0 feed.
« Education Policy Proposal #4: Restrict K-12 to Citizens Only
Education Proposals: Final Thoughts »