TFA Diversity and the Credibility Gap

As I’ve written, the available pool of black teachers is small because ed school can’t commit affirmative action and still produce teachers that can pass the licensure tests. This leads to a question that’s been plaguing me for a few months: how the hell can Teach for America have recruited around a thousand African Americans?1

Of course, to even raise the question is to offend with the premise. But then, that’s why I’m anonymous, to offend in the name of explanation. So let me be Vox:

Here’s 4 charts that explain everything you need to know about Ed’s perplexity: 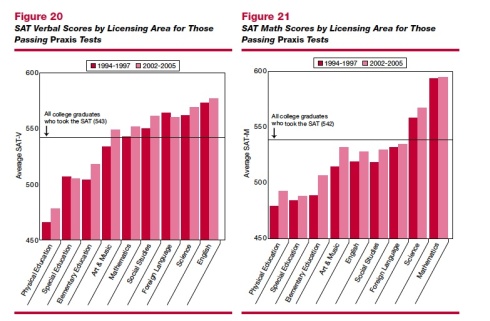 What you see right away: most blacks are getting credentialed as elementary, special ed, or PE teachers.

The average math/reading scores of blacks passing the Praxis in these 20 states2 is 482/459. The average math/verbal scores for all elementary school teachers, regardless of race, are about 520/480, and for high school academic teachers about 580 in the related content section (math for math/science, reading for history/English) and around 560 in reading regardless of content. As the chart shows, the average SAT score for college graduates is about 542 on both tests, meaning that despite the rhetoric, high school teachers in academic subjects aren’t just above average on the SAT, but above the 50% mark for college graduates.

About 13% of African Americans scored above 550 on the math and reading sections of the SAT each year, give or take.

Most researchers wisely refrain from putting all these numbers in one place, the better to avoid drawing obvious conclusions. But considering all these numbers, and remembering that African Americans have many other occupations to choose from, most of which without a content knowledge test, one can perhaps see why I find TFA’s claim of 1000 black teachers to be worthy of inquiry.

I don’t doubt their numbers. Perhaps I should; lord knows Gary Rubinstein has ample evidence that TFA cooks its stats. But I accept the numbers at face value, and also accept that these numbers reflect corps members who have passed their credential tests.

Well, as an obvious starting point: TFA is committing affirmative action. I know this partly because of the dog that didn’t bark. If black TFA corps members have ever had an average 3.6 GPA and a 1344 SAT (math and reading), then TFA would trumpet this fact on every brochure. I also know this because of the numbers I just provided–only 13% of African Americans are getting over 550 on any SAT section, and a smaller number is getting 550 over both (can’t tell how many, but it’s a percentage of a percentage, usually).

Besides, any time I see an article celebrating TFA’s high credential test passing rates, those passing rates aren’t 100%. Some TFAers are failing these supposedly simple tests. I imagine I know more about the SAT, ACT, GRE, GMAT, and LSAT than most and can score in the 98th percentile or higher on all of them. The elementary school credential tests in the linked articles present no challenge for anyone with a 1344 SAT.

So TFA commits affirmative action because the available pool of minority candidates simply doesn’t allow them to use the same criteria. Hence, lower SAT scores for blacks and Hispanics—except not too low, because of those same pesky credential tests.

Then what? How does TFA thread the needle to recruit African American can didates, given the tremendous opportunities in much better paying careers that exist for blacks with the cognitive skills necessary to pass the credential tests?

Here’s what I came up with.

I don’t have proof for any of this, and of course, people get very offended at the very idea that anything other than attrition explains the dearth of black teachers. For the reasons outlined, blacks who can pass the credential tests have many opportunities other than teaching, so it makes sense they’d have a lower tolerance and higher attrition. That said, I’m asserting, based on all available evidence, that it’s the tests keeping blacks out of teaching, and thus TFA’s claim of a 20% black teacher corps meeting the same selection standards needs…clarification.

I would love to be wrong. Proving me wrong would require TFA to provide racial breakdowns for SAT scores, college major, credential subject, and credential state. By all means, bring it on and I will happily recant if needed. If TFA provides hundreds of African American high school math teachers to California, I will gladly shout my wrongness from the rooftops. If the average African American SAT score for this year’s recruits is 1300, then I will paper Twitter with links announcing my error.

Someone’s surely going to ask, so what? So what if TFA is committing affirmative action and not using the same caliber test scores for blacks as whites? So what if they are recruiting blacks who already have teaching credentials? And why the hell do you have a problem with black veterans becoming teachers?

I have no problems with TFA recruiting veterans, career changers, credentialed teachers, and dedicated prospective teachers with lower test scores. But if black candidates make up a big chunk of these recruits, TFA should make this clear.

Because I get really tired of people like Michael Petrilli, Andrew Rotherham, Dana Goldstein, and all the other education folks praising TFA to the skies for its ability to be both selective and diverse. Whoo and hoo! TFA fixes both the major problems that our broken ed schools can’t be bothered with. Further evidence ed schools suck.

I can’t tell whether sheer ignorance or cunning disingenuousness drives these folks, but if reality disrupts that nonsensical narrative, so let it be done.

If TFA is bulking up its black and Hispanic candidates using the methods described, ed schools can’t compete and for more reasons than black credentialed teachers are counted twice.

Everyone tends to forget the one huge advantage TFA has over traditional credential methods. Corps members attend ed school—the same “broken” ed schools that credential traditional teachers. The difference lies in the practicum. Traditional teachers work for free as student teachers for six weeks to a year. TFA corp members’ “student teaching” is actual employment. They get seniority, resume experience, and best of all cash dollars for learning on students—and they do it without constant supervision.

So if you’re thinking of being a teacher but have bills to pay, would you rather take loans and go to ed school while working for free? or get a paid job in five weeks?

Not a tough call.

I’m a career changer who tried all sorts of ways to get into the classroom until I finally threw in the towel and went to ed school once my tutoring and test prep work allowed me to keep my “day job” while working for free as a student teacher. I considered TFA, but was told that the odds of getting in at my age were nil.

Ed schools can’t compete with any internship program that pays for classroom teaching time. Full stop. And before sneering about the marketplace, ask yourself how many people would pay for law school if they could easily practice law by taking a test and passing the bar exam.

But TFA is almost certainly not accepting all second career folk, and call me cynical, but I’ll bet they take black veterans and lawyers with mid-500 SAT scores over white career changers with high 700 SAT section scores but no PR value.

What TFA offers black candidates is the same that it offers white candidates—the imprimatur of a “select” organization, a chance to get a paying job more quickly. But if TFA is using different criteria to hire black candidates, then the selectivity is a lie. The black candidates are serving TFA’s purpose not by being “select”, but by being black, the better to shut down critics.

So the next time TFA trumpets its diversity, demand details.3

If I am wrong, if TFA is actually recruiting top-tier black talent away from law and medicine as opposed to just allowing reformers to pretend it is, that’s worth knowing.

Of course, if I’m not wrong, then everyone is forced to acknowledge the real reason we don’t have many black teachers.

2–The largest states don’t use the Praxis and aren’t part of this report. CA has just 4% black teachers, and blacks have dismal passing rates on its credential tests. Texas has a low teacher diversity index, sixth to California’s first. New York had a fairly diverse teaching force. Except, have you heard? NY’s credential tests just got tougher. As you may have gathered, harder credential test = higher SAT scores needed = fewer black and Hispanic teachers New York’s change will lead to fewer black and Hispanic teachers.

3–I am both intrigued and puzzled by the enrollment decline in ed schools, although TFA’s decline makes more sense. But ed schools shouldn’t be seeing this dramatic a drop-off, and I’m unsure as to the cause. I’d really like to see the numbers by race. But I left both declines out of this analysis, for now.

Teacher and tutor END_OF_DOCUMENT_TOKEN_TO_BE_REPLACED
This entry was posted on Tuesday, December 23rd, 2014 at 1:21 am and tagged with black teachers, TFA and posted in reform, teacher certification. You can follow any responses to this entry through the RSS 2.0 feed.
« Don’t Treat A Cop Like a Teacher
The SAT is Corrupt. No One Wants to Know. »

14 responses to “TFA Diversity and the Credibility Gap”