As previously explicated in considerable detail, I’m deeply disgusted with the Common Core math standards—they are too hard, shovel way too much math into middle school. If I see one more reporter obediently, mindlessly repeat that [s]tudents will learn less content, but more in-depth, coherent and demanding content my head will explode.

Reporters, take heed: you can’t remove math standards. The next time some CC drone tells you that the standards are fewer, but deeper, ask for specifics. What specific math standard has been removed? Do students no longer have to know the quadratic formula? Will they not need to know conics? No, not colonics. That’s what you all should be forced to endure, for your sins. In all likelihood, the drone has no more idea than you reporters do about high school math, so go ask Jason Zimba, who reiterates several times in this interview that the standards are fewer, but go deeper. (He also confirms what I said about algebra, that much of it is moved to middle school). Ask him. Please. What’s left off?

Pause, and deep breath. Where was I?

So the new CC tests are not multiple choice, a form that gets a bad rap. I give my kids in algebra one, geometry, and algebra two lots of multiple choice tests—not because I prefer them, and they aren’t easier (building tests is hard, and I make my own), but because my top students aren’t precise enough and they need the practice. They fall for too many traps because they’re used to teachers (like me) giving them partial or most of the credit if all they did is lose a negative sign. Remember, these are the top kids in the mid-level or lower math classes, not the top kids at the school. These are the kids who often can get an A in the easier class, and aren’t terribly motivated. My multiple choice tests attempt to smack them upside the head and take tests more seriously. It works, generally. I have to watch the lower ability kids to be sure they don’t cheat.

We’ve been in a fair amount of PD (pretty good PD, at that) on Common Core; last fall, we spent time as a department looking at the online tests. The instructors made much of the fact that the students couldn’t just “pick C”, although that gave us a chuckle. Kids who don’t care about their results will find the CC equivalent of picking C. Trust them. And of course, the technology is whizbang, and enables test questions that have more than one correct answer.

But I started thinking about preparing my students for Common Core assessments and suddenly realized I didn’t need technology to create tests questions that have more than one answer. And that struck me as both interesting and irritating, because if it worked I’d have to give the CC credit for my innovation.

On the first test, I didn’t do a full cutover, but converted or added new questions. Page 1 had 2 or 3 multiple answer questions and 3 was free-response, but on that first test, the second page was almost all multiple response:

I had been telling the kids about the test format change for a week or two beforehand, and on the day of the test I told them to circle the questions that were multiple answer.

It went so well that the second test was all multiple answer and free response. I was using a “short” 70-minute class for the test, so I experimented with the free-response. I drew in the lines, they had to identify the inequalities. 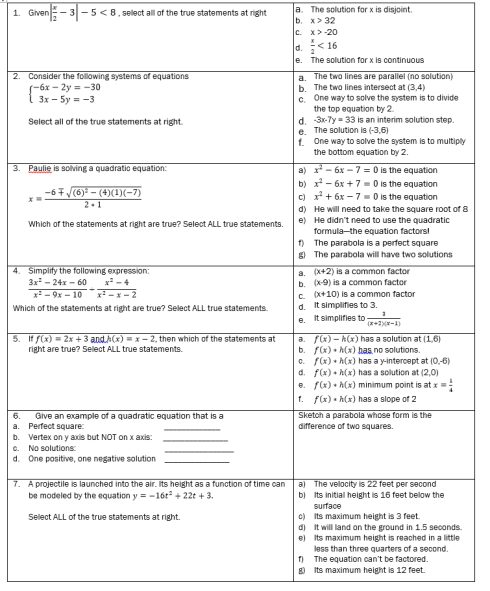 I like it so much I’m not going back. Note that the questions themselves aren’t always “common core” like, nor is the format anything like Common Core. But this format will familiarize the kids with multiple answer tests, as well as serve my own purposes.

Here’s one of my stronger students with a pretty good performance:

You can see that I’m tracking “right, wrong, and omit”, like the SAT. I’m not planning on grading it that way, I just want to collect some data and see how it’s working.

There were 20 correct selections on nine questions. I haven’t quite finished grading them, but I’ve graded two of the three strongest students and one got 15, the other 14. That is about right for the second time through a test format. Since I began the test format two thirds of the way through the year, I haven’t begun to “norm” them to check scrupulously for every possible answer. Nor have I completely identified all the misunderstandings. For example, on question 5, almost all the students said that the “slope” of the two functions’ product would be 2—even the ones who correctly picked the vertex answer, which shows they knew it was a parabola. They’re probably confusing “slope” with “stretch”, when I was trying to ascertain if they understood the product would be a parabola. Back to the drawing board on that.

Added on March 7: I’ve figured out how to grade them! Each answer is an individual True/False question. That works really well. So if you have a six-option question, you can get 6/6, 5/6, 4/6 etc. Then you assign point totals for each option.

I’ll get better at these tests as I move forward, but here, at least, is one thing Common Core has done: given me the impetus and idea for a more flexible test format that allows me to more thoroughly assess students without extending the length of the test. Yes, it’s irritating. But I’ll endure and soldier on. If anyone’s interested, I’m happy to send on the word doc.

Note: Just noticed that the student said y>= -2/3x + 10, instead of y<=. It didn't cost her anything in points (free response I'm looking for the big picture, not little errors), but I went back and updated her test to show the error.

Teacher and tutor END_OF_DOCUMENT_TOKEN_TO_BE_REPLACED
This entry was posted on Friday, January 17th, 2014 at 2:20 am and tagged with algebra 2, assessment, Common Core and posted in math, teaching. You can follow any responses to this entry through the RSS 2.0 feed.
« Memory Palace for Thee, but not for Me
Assessing “Upper Level” Math Students on Algebra I »