The lurker in the teacher quality debate

Just a few weeks after I complained that the debate on teacher quality ignores state certification tests, Ed Week steps up: Analysis Raises Questions About Rigor of Teacher Tests (Edweek has a paywall, but the synopsis I used includes a link to the original):

The average scores of graduating teacher-candidates on state-required licensing exams are uniformly higher, often significantly, than the passing scores states set for such exams, according to an Education Week analysis of preliminary data from a half-dozen states.

The pattern appears across subjects, grade levels, and test instruments supplied by a variety of vendors, the new data show, raising questions about the rigor and utility of current licensing tests.

I’m happy to see the attention, but what “questions about the rigor and utility”? The scores are high, so there’s a problem? Imagine for a moment that the average score was juuuuuust barely above the cut score. Would Edweek then congratulate the states for setting such an ambitious cut score that teachers barely qualify? I’m thinking not. Besides, this analysis is missing a key ingredient: without a benchmark, passing rates or cut scores tell us nothing about the test’s rigor or utility. The ETS provided that information in its teacher quality report a few years back, so it’s no secret. Without that information, I really don’t see the point of this analysis.

But if the people at Edweek are really wondering why the teacher certification cut scores aren’t higher given the high average score, I think I can provide illumination, thanks to the always useful ETS, an organization that really isn’t given enough credit for its useful information. 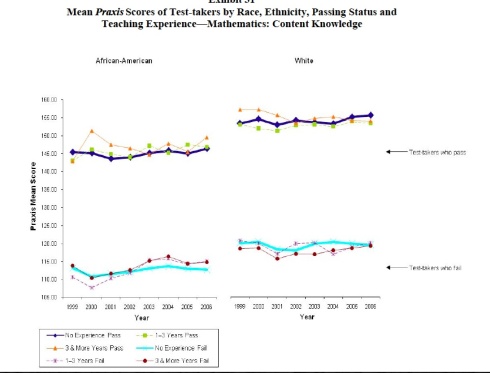 This particular data is for the Math Content Knowledge Praxis II test, but the report shows the same gap in all the Praxis II tests—African Americans who have passed the Praxis (both I and II) scored over one standard deviation below whites.

Average score and passing rates (again for math, but the link above has all the scores).

Praxis states don’t have substantial Hispanic populations, but California does, showing Hispanic pass rates that are, as always, in between blacks and whites. (this chart again is for math)

These pictures make it pretty clear that raising the cut scores dramatically wouldn’t affect passing rates for white teacher candidates all that much but would run a buzz saw through the prospective non-Asian minority teaching pool. And while no one appears willing to say so, I suspect that cut rates are set to allow some percentage of black and Hispanic teacher candidates.

Black and Hispanic teachers are severely underrepresented. Reporters and educational pundits go through a great show every so often of scratching their heads and wondering why—and then, the next day, interview eduformers demanding that we raise the bar on teacher qualifications without ever connecting the dots.

From another ETS report that combined extensive reporting on the teacher test score gap between blacks and whites with ed school student and faculty interviews, an observation I’ve never seen in a story on the missing minority teachers:

First, raising teacher quality, whether by requiring more education or higher qualifying test scores, would further reduce the ranks of black and Hispanic teachers and make the teaching pool much whiter and Asian that it already is.

Second, the evidence linking teacher credentials, whether it’s degrees or test scores, to student achievement is sketchy at best, non-existent in most cases.

So I ask again: How smart do teachers need to be? What proof is there that raising the teaching standards will lead to better educational outcomes?

Teacher and tutor END_OF_DOCUMENT_TOKEN_TO_BE_REPLACED
This entry was posted on Sunday, February 12th, 2012 at 11:07 am and tagged with reform, voldemort and posted in reform, teaching, voldemort. You can follow any responses to this entry through the RSS 2.0 feed.
« Modeling with Quadratics
Sigh….. »

4 responses to “The lurker in the teacher quality debate”