The Dark Enlightenment and Duck Dynasty

The Dark Enlightenment has been discovered. Eeeek. 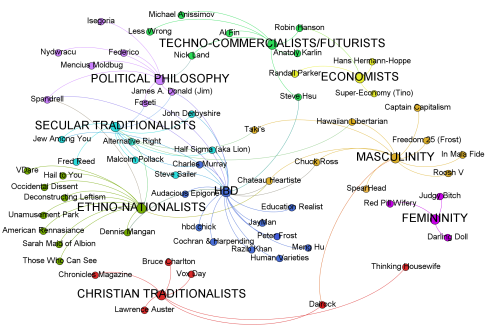 I’ve written about my adoption by the Network and have nothing to change–it’s not something I consider myself part of, per se, but they apparently find my writing helpful. I’m fine with that. I would refer Jamie Bartlett to the above image to reinforce what seems to me to be obvious: the “dark enlightenment” is not characterized by political objectives and has very little unity of purpose.

hbd chick wrote a detailed response to the Jamie Bartlett column which, to the extent I understand it, I agree with. But I would refer someone trying to figure this thing out to read the comments, particularly this one by T. Greer:

The many voices in the ‘dark enlightenment’ do not harmonize. They don’t share the same ideals, aims, or even impulses. They defined by a shared enemy; were this enemy to disappear then so would all talk of a cohesive ‘dark enlightenment.’
…
The major strand that unites the entire community is a willingness to frankly state opinions polite society does not accept (but in many cases once did) and listen to others do the same.

That is, as I say in response, the defining element of the Dark Enlightenment is not political, philosophical, or cultural views, but a shared loathing of “The Cathedral”. Unfortunately, I can’t find one clear definition of the Cathedral that doesn’t involve reading all of Mencius Moldebug, who I don’t really understand and makes me feel Hemingway brusque. I use the term Voldemort View to characterize the most likely reason for the achievement gap; the Cathedral can be thought of as the Canon of Modern Anathema, the official dogma of views that must not be spoken. Some of the views are actual truths, others are opinions. But if they are uttered, the speaker must be cast out into the darkness and, more importantly, economically ruined.

I can think of no common objective the nodes in that diagram share, but we all hate and despise the Cathedral. Our touchstones are not racial purity, male dominance or a derailing of democracy (all objectives I unreservedly oppose) but the expulsion of James Watson, Jason Richwine, and John Derbyshire—whether we agree with them or not. I almost never hate people. But I hate the Cathedral. Probably in part because I trusted it a couple decades ago, and there’s nothing like a reformed ex-smoker. Screw you if you want me to righteously disassociate. Take my ideas on their own merit or don’t, never assume I agree with any idea unless I say so. But if you’re the sort who demands indignant condemnation, it will be my considerable pleasure to deprive you of that satisfaction. In short–but why be short when English has so many words?—I will not disavow on principle.

I suggest that if the “dark enlightenment” is spreading, it does so not because of any distaste for democracy, much less some weird white guy radicalization, but because the general public is slowly becoming deeply tired of the elites getting exercised about exorcising yet another heretic.

And so to Duck Dynasty, a show I vaguely knew of before the fuss. Phil Robertson opines, identity groups cluck, and all the pundits write cynically about the outrage, secure in the knowledge that the machine will roll over and crush Robertson. But then, glory be, the Robertson clan doesn’t just refuse to back down, it refuses to apologize, and for once, the cultural segmentation of American society turns out to be a net positive. Christians everywhere have time to make their displeasure known, and A&E realizes that the money move lies in keeping Phil, leaving GLAAD out in the cold. Truly a great day. And if you can’t understand why an agnostic with no interest in denying the reality of pre-civil rights America would celebrate that outcome, you don’t understand how much I hate the Cathedral.

Patton Oswalt quoted Steve Sailer’s pithy statement “Political correctness is a war on noticing”. A few of his followers disapproved. The resulting twitter fest is very funny, as a couple of Oswalt’s followers try to alert him to the evils of Sailer, and Oswalt remains blithely unconcerned. Money quote, from Oswalt: “I’ve never been scared of ideas. I can hear all kinds & still keep my feet. Think I’ll call this stance ‘diversity'”.

But then you’ve got the earnest, well-meaning Michael Pershan, one of the only actual math bloggers I read. Pershan is Jewish, I think, although he never mentions it on the site (I remember his wedding announcement vaguely), and I mention this only because when I read this twitter mess my first thought was “he’s Jewish, he went to Harvard, he lives in New York City, and he didn’t see this coming?” But I think he’s a particularly observant Jew (not like noticing things, like observing Jewish custom), and until recently taught at a Jewish boys’ high school, so perhaps he doesn’t get out much.

Anyway, he takes gentle issue with a PoC teacher blogger who makes what would normally be called racist statements were he talking about anyone but white folks, and gets “schooled”, literally, in a key plot point: in the identity culture, all whites are the same. Michael Pershan, like many reflexive progressives (the sort who haven’t really thought it through but hey, all their friends are doing it) wants race and gender warriors to accept that there are “good” whites and “bad” whites. He wants to be able to point fingers and shame bad whites, but is troubled that the PoC and women seem to paint all whites and all males as the same. The identity divas will have none of that, and kick him around for a while. Pershan has retired from both the fray and Twitter, which is too bad. Not that I sympathize with his point of view. If you want to walk the identity path, baby, then all whites are equally undeserving of their largesse. You either reject or embrace the identity and entitlement game in its entirely; there are no half measures. The correct response is to deny the identity folk all satisfaction. It’s okay, they mostly enjoy the process, gives them something to complain about.

And just to show the compartmentalization of my ideas: I think many of the people beating down Michael Pershan in that conversation are just fine, as teachers. I often agree with them. Not always. Jason, the PoC blogger who started the sound-off, has a good teaching blog, and I don’t find his writings on identity to be insanely insufferable, which is a compliment.

I want more Duck Dynasty victories. I want the Michael Pershans to laugh at the very idea of seeking approval from identity divas. I want the Cathedral thwarted routinely and eventually dismantled. Not as a blogger, but as a person.

As a blogger, I’ll still write about education policy and education itself from all different angles, including the lamentable determination to ignore cognitive ability.

On that point, I’ve noticed a recurring theme that Razib Khan made in the hbd diva post, also seen here in Rod Dreher’s call for silence on HBD: the notion that most people who “embrace” (their word) racial differences don’t have a clue about the science.

I don’t read the other sites much, save for Steve Sailer and Razib Khan, so maybe they’re doing all sorts of bad science. For myself, I don’t do science. I barely do math.

I often see reporters refer to “beliefs” or “opinions” about IQ. My “beliefs” about IQ involve the degree to which IQ is inaccurate, missing some aspects of intelligence that might be largely irrelevant to measuring IQ among white populations, but highly relevant in others. Actually, they wouldn’t go so far as “belief” or “opinion” but maybe “wonderings”.

But they aren’t talking about those beliefs, but the “belief” that IQ is meaningful, that IQ is not the same in different populations. That’s not a belief.

Or, as Steven Pinker famously wrote of Malcolm Gladwell’s maunderings on IQ: “What Malcolm Gladwell calls a “lonely ice floe” is what psychologists call ‘the mainstream.'”

When taking down a heretic, Cathedral strategy demands that the heretic be easily expelled with a minimal degree of cognitive dissonance. And so no one takes on Steven Pinker. Many reporters regurgitate what they understand of the Flynn Effect, but no one asks James Flynn if black IQs are, on average, lower than white IQs and whether that might make a difference to academic outcomes or whether the gap can easily be fixed with a more nurturing environment. Only one person asked Harvard’s Christopher Jencks why he blessed Jason Richwine’s doctorate, or why Harvard signed on for it. These people are of the Cathedral and if they challenge the canon, maintaining orthodoxy becomes impossible. So they are left alone, ignored politely when they speak anathema.

I don’t do science. I keep my blog anonymous because of I explore the impact of the Voldemort View, the view that must not be spoken, the view that says the achievement gap between different racial and income groups is primarily caused by differences in cognitive ability, on educational outcomes. I believe that IQ is imperfect as a metric of cognitive ability, although I can’t prove it and my opinion is still inchoate (ooh, Thomas of Convenant!). I accept the mainstream findings that shows a clear and largely unchanging difference in IQs by race and income. If Steven Pinker, James Flynn, or Christopher Jencks have said anything that disagrees with my representation of mainstream research, most fully articulated here, I’m unaware of it. So don’t ask me about IQ and race. Ask them.