Function definitions aren’t usually tested on either the SAT or the ACT and since I never worked professionally with math, functions were something I’d barely considered in algebra a billion years ago. So for the first few years of teaching, I kind of went through the motions on functions: unique output for each input, vertical line test, blah blah. I didn’t ignore them or rush through them. But I taught them in straight lecture mode.

Once I got out of the algebra I ghetto (which really does warp your brain if that’s all you do), I accepted that a lot of the concepts I originally thought boring or unimportant show up later. So it’s worth my time to come up with the same third way activities and lessons for things like functions or absolute value or inverses that I do for binomial multiplication and modeling linear equations and inequalities.

So every year I pick concepts to transfer from pure lecture/explanation to illustration. Sometimes it’s spur of the moment, other times I plan a formal curriculum change. In the case of functions, the former.

Last year I was teaching algebra II/trig and–entirely in passing–noted a problem in the Holt book that looked something like this: 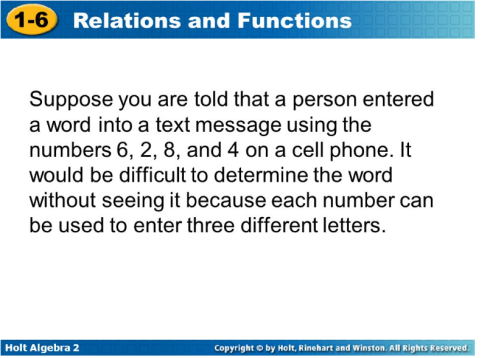 and had two simultaneous thoughts: what a boring question and hey, I could really do something with that.

So the next day, I tossed this up on the board without comment.

I’ve given these instructions three times now–a2/trig, trigonometry, algetbra 2–and the kids are always mystified, but what the heck, the activity seems simple enough. No student ever reads through the entire list of instructions first. They spend a lot of time picking the message, with many snickers, then have fun translating the code twice.

But then, as they all try to translate someone else’s message using the cell phone code, bam. They realize intuitively that translating the whole-alphabet code would be an easy task. And with a few moments of thought, they realize why the cell phone code doesn’t offer the same simple path. They don’t know what it means, exactly. But the students all realize that I’ve demonstrated a difference that they’d never considered.

From there, I graph the processes, which is usually a surprise as well. The translation process can be graphed?

At this point, I can usually convince kids to remember the Vertical Line Test, which they were taught in algebra I. At that point, I go through the definitions for relation, function, and one-to-one function, using a Venn diagram (something like this with an addition inner circle for one to ones). Then I go back through what the students vaguely remember about functions and link it to the correct code example.

Thus the students realize that translating the message into code is a function in either code key. I hammer this point home, because the most common misconception kids get from this is that all functions must be one to one. Both are functions. Each letter has one and only one number assigned, and the fact that one translation key puts several letters to the same number is irrelevant for its determination as a function. Reversing the process, going from numbers to letters, only one of them is a function.

Then I sketch parabolas and circles. Are they both functions? Are either of them one-to-one functions?

In Algebra 2, I do this long before the inverse unit. In Trig, I introduce it right before graphing the individual functions as part of an overview. In both classes, the early intro gives them time to recognize the significance of the difference between a function and the more limited case of the one-to-one function–particularly in trig, since the inverse functions are very limited graphs for exactly the reason. In algebra II, the graphs reinforce the meaning of the Horizontal Line Test.

I haven’t taught algebra I recently, but I’d change the lesson by giving them a coded message and ask them to translate with the cell phone code first. 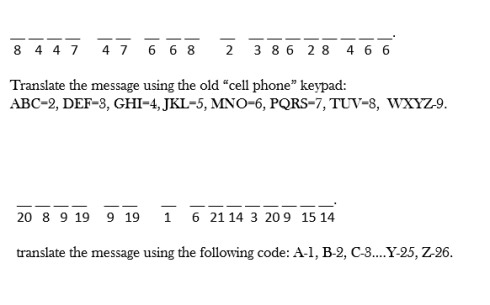 This leads right into function and not-function, which is all they need in algebra I.

I have periodically mentioned my mixed feelings about CPM. Here’s a classic example. The CPM book introduces functions with the following example.

Okay. This is a terrible example. And really boring. Worst of all, as far as this non-mathie can tell, towards the end it’s flat out wrong. A relation can be predictable without being a function (isn’t that what a circle is?). But just looking at it, I got an idea for a great test question (click to enlarge):

And I could certainly see some great Algebra I activities using the same concept. But CPM just sucks the joy and interest out of the great starting ideas it has.

Anyway. I wanted to finish up with a push for illustrations. What, exactly, do the students understand at the moment of discovery in this little activity? I’ve never seen anyone make the intuitive leap to functions. However, they do all grasp that two tasks that until that moment seemed identical…aren’t. They all realize that translating the message in the whole-alphabet code would be a simple task. They all understand why the cell phone code translation doesn’t lend itself to the same easy translation.

I look for illustrative tasks that convince kids to think about concepts. As I’ve said before, the tasks might kick off a unit, or they might show up in the middle. They may demonstrate a phenomenon in math, or they might be problems designed to lead the students to the next step.

The most common pushback I get from math teachers when I talk about this method is “I love the idea, but I don’t have enough time.” To which I respond that pushing on through just means they’ll forget. Well, they’ll probably forget my lessons, too, but–maybe not so much. Maybe they’ll have more of a memory of the experience, a recollection of the “aha” that got them there. That’s my theory, anyway.

There’s no question that telling is quicker than illustrating or letting them figure it out for themselves. Certainly, the illustration should be followed by a clear explanation with much telling. I love explaining. But I’ve stopped kidding myself that a clear explanation is sufficient for most kids.

That said, let me restate what I said in my retrospective: The tasks must either be quick or achievable. They must illustrate something important. And they must be designed to lead the student directly to the observations or principles you want them to learn. It’s not a do it yourself walk in the park. Compare my lesson on exploring triangles with this more typical reform math example. I resist structure in many aspects of my life, but not curriculum.

In researching this piece, I stumbled across this really excellent essay Why Illustrations Aid Understanding by David Kirsh. I strongly recommend giving it a read. He is only discussing the importance of visual illustrations, whereas I’m using the word more broadly. Kirsh comes up with so many wonderful examples (math and otherwise) that categorize many different purposes of these illustrations. Truly great mind food. In the appendix, he discusses the limitations of visually representing uncertainty.

On reading this, I felt like my students did when they realized the cell phone message was much harder to translate: I have observed something important, something that I realize immediately is true and relevant to my work–even if I don’t yet know why or how.