Part Three of my Caplan thoughts.

–Caplan, The Case Against Education

Caplan screws up the analogy. He says the obvious remedy is  “don’t use the cream”  (end all public education) but then explores “use less of the cream” (end subsidies) or “buy a cheaper cream” (curriculum austerity).

But I digress. Caplan uses some extremely old data–the 2003 National Assessment of Adult Literacy (NAAL). The NAAL results are categorized as Below Basic, Basic, Intermediate, and Proficient (the survey had originally wanted to use “Advanced”, but considered it too value-laden. As if “Proficient” isn’t.) Caplan uses this data to argue that Americans are incredibly uneducated and therefore American education is terrible–the toe fungus that can’t be cured.

There’s a lot wrong with his analysis, some of which I’ll hold off until the next chunk, and he misrepresents NAAL’s connection to public education. Besides, static education snapshots are pointless. Change over time and disaggregation, baby, or it’s nothing. So I disaggregated by education category and found change over time, using the same report Caplan cites.

NAAL has three categories of assessment: prose, document, and quantitative. The adults surveyed were captured by their highest level of education: still in high school all the way through graduate degree.  So I broke the scores into two categories. First, on the left, are the scores of those whose highest education was vocational school or lower. On the right, those with some college through graduate degrees. In each case, the graph shows the average score for that category in 1992 and then in 2003. I’m terrible at data display, but I made the axes the same–the actual scores go from 0 to 500, but that was too small.

Here’s another take on the data, using a graph straight from the report. The percentage of “proficient” readers declined significantly for most college categories, while remaining largely unchanged for the high school only educated groups.

At the low end, the “less than/some high school” reading abilities dropped in the prose category, but the rest remained largely unchanged. 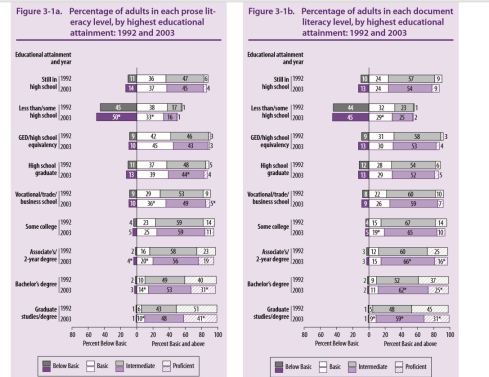 Caplan doesn’t look at change over time, and so doesn’t take on the challenge of explaining why the average college graduate living in America became less proficient at reading over a decade.

Caplan’s opponents in the economics field argue that education builds human capital. Human capital is, or should be, reflected in the score gaps between different education categories. Those with some college should have higher scores than those with none, and so on.

So I calculated the change in the gap between “adjacent” education categories from the 1992 NAAL to the 2003 study.

So in one decade, the human capital improvement of education dropped in all but one college category.

From 1992 to 2003, high schools produced the same caliber of student. Colleges produced lower quality students that had built less human capital with their increased education.

It will come as no surprise that colleges produced more graduates than before.

Caplan goes on about inflated credentials, the perils of increased access. But he doesn’t acknowledge a simple truth: it’s colleges, not high schools, that have significantly deteriorated in their ability to build human capital.

Because they are increasingly reaching further down into the barrel, accepting everyone. They’re accepting kids who can’t read at an eighth grade level, who can’t do middle school math. They have no standards beyond what’s on the high school transcript (giving high schools tremendous incentives of the wrong sort). For the past several decades, post-secondary education have been accepting transcripts at face value, then testing the students to establish how truthful the transcript was, then putting the students whose abilities didn’t match the transcript into remediation. Every state has its tale of trying to increase access, only to learn how shockingly unprepared and incapable students were, and how their efforts at remediation ended in failure.

All these efforts have only depreciated the value of a college degree. But not content with accepting unqualified students and trying to remediate them before, sadly, flunking them out, colleges kept reaching further down. It’s now quite possible to get accepted to college with Algebra 2 on the transcript, demonstrate that you have only elementary school math, take middle school math classes for credit, and earn a degree. No more remediation. Math was the last holdout; English and grammar requirements have been much easier to ignore.

Caplan argues that most cost benefit analyses for college education fail to account for dropouts. But colleges are reducing the risk of dropping out by lowering standards even further. His own college accepts unqualified students every year; 25% of George Mason’s freshmen enter with SAT scores below the “college ready” standard.  Now that colleges are ending remediation and giving credit for middle school ability, the risk of dropping out will continue to diminish. Those who want to “signal” will have to get graduate degrees–and of course, some academic will come along in a few years and deem “graduate degree” a “path to success”, and then everyone will do that.

“Would you rather have a Princeton degree without the education, or the Princeton education without the degree?”  Caplan asks, and readers go oooooh and aahh.

But that wasn’t always the case. Back when a college degree had meaning, a degree from a decent public university meant an education that would take one further than a Princeton diploma with no knowledge. Unfortunately, colleges have unilaterally obliterated all faith in their ability to educate, leaving  competitive admissions  on test scores–tests not administered by colleges in any way–as the only indicator of potential intelligence.

Caplan’s fix is to deny all educational funding. Applying that solution simply to colleges won’t solve anything. Colleges will still have the incentive to lower standards. The free market won’t fix the signalling problem. Ending public funding of education won’t stop colleges from lowering standards and giving degrees to anyone who can buy them. It will just deny any chance of education to those who can’t afford it. Over time, America under Caplan’s rule would be a country where rich people got educated, not smart people. We spent generations giving opportunity to those who could achieve. Our error was not spending too much money, but forgetting the meaning and the demands of education itself.

In Caplan’s view, “We would be better off if education were less affordable.” He wants to deny education to everyone who can’t afford it.

Why make it about money? Why not about ability?

We could prevent  or minimize toe fungus, the failure to successfully educate,  at the college level by setting a standard for college entry. Those who meet the standard can still qualify for public funding. I suggested a standard, back when I was an optimist who couldn’t even imagine colleges abolishing remediation.

Setting a standard for college entry would reduce the risk of failure as well as increase the human capital earned by even an incomplete education. Going to college wouldn’t just be another educational choice, but a choice only available to those who have the ability to develop and use the education.

Understand that I’m not some purist, calling for the days of Latin and Greek. I’m saying that colleges should accept students who can read, write, and calculate at an agreed-upon level. The levels we used in the 30 years after World War 2 would do nicely.

There are obviously–oh, so very obviously–political problems that go along with restricting access to higher education. But Caplan, man, he’s bold. He’s fearless. “In any other industry, a whistle-blower would be an outcast.”

So why call to eliminate public funding, denying education to qualified people who can’t afford it, while not bothering to fix the obvious standards problem in college admissions?

Maybe Caplan’s political ideology suggests the nail to which libertarianism has the hammer. I dunno.

What I do know is that people have been complaining about “too many kids are going to college” for forty years or more. It’s not new. It’s not bold. The devil is very much in the details. Which Caplan avoids.