The introspection kicked off when I reread one of the first posts I ever wrote on this site, over 3 years ago, halfway through my third year of teaching. Some key observations:

I wrote this post on January 8, 2012, at almost exactly the same time I began an experiment that utterly transformed my teaching. I speak, of course, of Modeling Linear Equations, which I’m amazed to realize I wrote just one week after the “How I Teach” post. So shortly after I began this blog and described my teaching method, I started on a path that took my existing teaching approach–which was pretty good, I think–and gave it a form and shape that has allowed me to grow and progress even further.

I haven’t really read this post in over two years—I tend to link in Modeling Linear Equations, Part 3, written a year later (two years ago today!), when I’d realized how much my teaching had changed. So reading the original is instructive. I talk about the Christmas Mull, something that stands very large in my memory but don’t remember quite as described here: 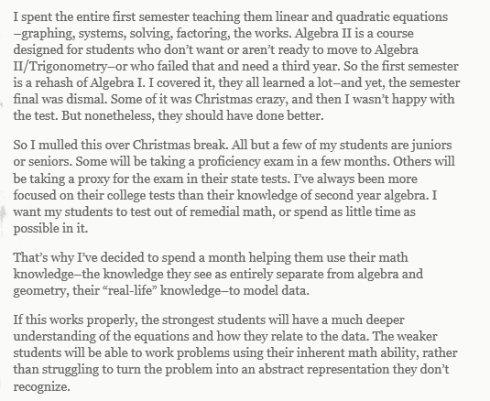 The part that’s consistent with my memory: Christmas 2011, I was depressed by the dismal finals in my three algebra II classes. In the first semester, I had gone through all of linear and quadratic equations, including complex numbers, at a rate considerably slower than two colleagues also teaching the course. Yet the kids remembered next to nothing. Every single person failed the multiple choice test–the top students had around half right. I had experienced knowledge fall-offs in algebra and geometry, but nothing that had so sublimely illustrated how much time I’d wasted in three months. So I came out of the Christmas break determined to reteach linear and quadratic equations, because to continue on teaching more advanced topics with these numbers was purely insane. And I wasn’t just going to reteach, but come up with an entirely different, less structured approach that allowed my students to use their own understanding of real-life situations.

What I hadn’t remembered until reading this closely was my rationale for ignoring the regular curriculum requrements. At the time, Algebra 2 was considered a “terminal” class; students weren’t expected to take another course in the college-prep sequence. This has changed, of course–these days, algebra 2/trig is, if anything, experiencing a fall-off in favor of a full year of each course. But at the time, I justified my decision to go off-curriculum based on the student needs. These students’ primary concern, whether they knew it or not, was what happened to them in college. How much remediation were they going to need? Could the best of them escape any remedial work and go straight onto credit bearing courses? This, of course, still remains my priority–I’d just forgotten how linked it was to my initial decision to try something new.

Also interesting that I described this approach by the specific method I used for linear equations–using “inherent math ability”. That’s not how I describe my approach these days, but I can see the germination of the idea. At the time I wrote this, I had no idea I would go beyond linear equations and use this approach consistently throughout my instruction.

I think the best description I’ve come up with for my approach is modified instructivist, which comes in one of two forms: “highly structured instructivist discovery, and classroom discussions with lots of student involvement”.

What’s structured discovery? Imagine a teacher and students on a cliff, with a beach below. There’s a path, but it’s not visible.

In a traditional lecture or classroom discussion, the teacher shows them the path and leads them down to the beach.

In a discovery class, the teacher doesn’t even tell them there’s a path or even a beach. In fact, to the discovery/reform teacher, it doesn’t matter whether there’s a path or not—the kids will all find their own way down. Or maybe they’ll just find some really cool flowers and stop to examine their biology. Or maybe they’ll just kick back and have a picnic. It’s all good, in reform math. (sez the skeptic)

In what I call structured discovery, the kids are given a series of tasks that use their existing knowledge base and find the path themselves. They may not yet know there’s a beach. They may not know what the path means. But they will find the path and recognize it as a consistent finding that makes them go “hmm”. In some cases, an interesting finding. In other cases, just something they can see and understand.

In other cases, the model just introduces an inevitable observation that leads to the new concept. For example, I teach my kids about function operations when we do linear equations–adding and subtracting are good models for simple profit and loss applications.

So I kick off quadratics by asking my students to multiply linear functions, which they can see clearly as an extension of adding and subtracting them. This is an activity they can start off cold, with no intro (I haven’t written it up yet). I designed this because parabolas just don’t have a natural “real life” model other than area, which gets kind of boring. Plus, I need to cover function operations anyway, so hey, synergy. In any event, the kids are seeing an extension of a concept they already know (function operations) and seeing a new graph form consistently emerge. Then we can talk about factors (the zeros) and realize that we are looking at products of two lines. Could a parabola exist without being a product of two lines? Well, this is algebra 2 so they are fully aware that parabolas don’t have to have zeros. But what does that mean in terms of multiplying lines being factors of parabolas? Well, they must not have factors. So are all parabolas the product of two lines? And we go from there.

Understand that my classes still have lots of practice time where kids just factor equations and graph parabolas, learn about the different forms, and so on. But rather than just saying “now we’ll do this new thing called a parabola”, I give them a task that builds on their existing work and leads them into the new equation type. I don’t define the path. But nor do I let them go off on their own. I give them something to do that looks kind of random, but is in fact a path.

And all of this came from the results of the Great Christmas Mull. The previous Christmas had been productive, too–it’s when I came up with differentiated instruction for my algebra class.

So what can I say about my teaching, 5.5 years in? What’s consistent, what’s changed?

I have plenty of development areas ahead. I’m working on tossing in the occasional open-ended instruction, just to see if I can come up with ideas that don’t waste hours and have some interesting learning objectives. I still have many concepts waiting to be converted to a “path to the beach”. And I’m now teaching something other than math, which gives me new challenges and more opportunities to see how to construct those paths without running off the cliff.

Teacher and tutor END_OF_DOCUMENT_TOKEN_TO_BE_REPLACED
This entry was posted on Tuesday, February 17th, 2015 at 12:43 am and tagged with function operations, instructivism, quadratics and posted in pedagogy, philosophy. You can follow any responses to this entry through the RSS 2.0 feed.
« I Don’t Do Homework
Group Work vs. Working In Groups »

18 responses to “Teaching: My Retrospective”