A couple years ago, I suddenly realized that my students rarely evaluated quadratic expressions. And when I thought about it, I could see why.

These are kids who aren’t too great at working with negatives, yes? And it’s a whole bunch of work for a relatively small gain. Makes it tough to guess and check, to work velocity problems, and so on. I want something simpler.

Enter the Remainder Theorem: the remainder of the division of a polynomial f(x) by a linear polynomial x-a is equal to f(a).

We usually teach synthetic substitution when introducing with the Fundamental Theorem of Algebra, which is when we give advanced students the bad news—at a certain point, factoring higher-degree polynomials becomes guess and check. Here’s the Holt book, for example: Chapter 5, Quadratics, covers evaluation by substitution (aka, plug it in). Chapter 6, Polynomials (meaning degree greater than 2), covers polynomial division, synthetic substitution/division, remainder theorem, and factor theorem, leading up to the fundamental theorem of algebra. Notice, too, that the book is a tad soulless on two of the more remarkable theorems, as I write about here.

So this is screwed up. First, quadratics are polynomials, thankyouverymuch. Second, synthetic substitution/division solves the problem I started with: it’s brutal to evaluate quadratics if you can’t do it in your head—and most of my students can’t.

Then, there’s the fact that polynomial operations in algebra 2 are like kissing a sister; students don’t really learn the purpose for these operations until math analysis and calculus. Over half my students are in their last high school course and won’t be taking anything more advanced in college, but they will need knowledge of these operations for math placement tests. The other half will be moving on to math analysis, and need the skills.

My algebra II/intermediate algebra class is comprised of four modeling units: linear equations (and inequalities), quadratic equations, exponential functions, and probability. I intersperse polynomial operations, inverses and logarithms between these four units. Logarithms fit organically with exponential functions; polynomial operations and inverses, not so much in a world where I’m not going on to the more rigorous parts of algebra 2. But inverses work as a good review of multistep equations, so the kids get some good practice in another skillset they need. Leaving polynomial operations as just….out there.

I haven’t been terribly unhappy with this, given the purely functional nature of the lessons, but I want my kids to know synthetic sub/div, dammit, and I want an organic way of introducing it. Right now, I go from linear equations to polynomial operations, ending with multiplication, which takes me into quadratics. That works, but not as smoothly as I want.

A couple days ago, I was pondering how to explain the synthetic substitution/division problem as a blog post, when I suddenly thought of a way to better integrate polynomial operations in and around my first two modeling units. I can use function operations as a method of introducing the transitions. Normally, I just introduce the function notation so they’re familiar with it. (Composites don’t normally show up on the test, and are covered again in pre-calc.)

This is just an outline, but remember that I have all the units done. All I’m describing, broadly (without any curriculum yet) is the transitions, the points at which I introduce and then return to polynomial operations.

After Linear Equations and Inequalities,

I could start with a question like: “Part 1: Sami needs three more dollars to buy the new hoodie that he wants. Model a relationship between the money Sami has and the money he needs, and plot.”

Then, Part 2: “If Sami skips the hoodie, he needs just one more dollar to buy a ticket to the pizza feed on Friday. Model a relationship between the money he has and the money he needs, and plot.”

Part 3, starting as a discussion: “How much more money does Sami need if he wants both the hoodie and the ticket to the pizza feed?” My guess, although I’m happy to be wrong, is the kids will say that Sami needs four more dollars. And so how can they use the graphs to show otherwise?

So we can show graphically and algebraically that adding the two equations together will give us one equation that we can use to see how much more money Sami needs. At this point, I can introduce polynomial addition and subtraction in its simplest form. This will just be a couple days–one for addition, one for subtraction. But it allows me to reinforce linear graphing one more time, in addition to the new concept.

Then I can move from addition and subtraction to multiplication.

I’ve always introduced quadratics with the modeling exercise above, then moved onto binomial multiplication. I really like the possibilities that come up after adding and subtracting linear functions, by asking the question (without the graph, at first):

In class discussion, I’ll point out the negative values, the positive values and the points at which one graph is positive and one negative. What’s going to happen when these are multiplied? (Hey, it never hurts to remind them about negative integer operations.) I haven’t completely thought through implementation—I definitely want them graphing this. Maybe give them the two lines at first, have them multiply the values.

I mentioned earlier that I’ve been looking for a better method of modeling quadratics. While this approach doesn’t involve situation modeling, it does organically introduce the shape of a parabola. It will also help them spot zeros.

And this leads in perfectly to my binomial multiplication unit, which I already extend to include higher degree polynomials. With the strongest kids, I can even give them three lines and have them determine what a cubic function looks like.

Then, when I’m moving from binomial multiplication to factoring, I can show a graph like the one at right and ask:

which, of course, brings up function division, and allows me to introduce factoring as a variant of division–and, a month or so after we’ve done linear equations, they get to review the concepts. As I write this, I’m trying to think if it makes more sense to introduce long division and synthetic substitution at this point, or to work on factoring for a while and then bring up division. TBD.

If you’re not familiar with synthetic sub/div, take a look at long division and synthetic division side by side: 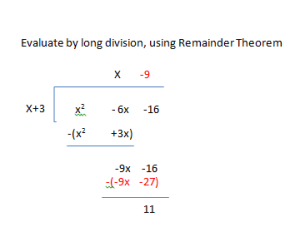 After I’ve finished all of linear and all of quadratics, I can do a few days on polynomial operations and function notation, just to wrap up.

Again, this is very skeletal. I just had the idea because of the writing challenge. Thanks, blog! But I know it will work; I can feel it. I just have to be careful and think through the transitions thoroughly, make sure I’ve given the kids plenty of support. For example, I don’t want to overemphasize the function operations of this. I just want the kids to be comfortable with the notion of addition, subtraction, multiplication and division of equations. That will give me the entrance to teach them synthetic div/sub, as well as the reason for practicing polynomial ooperations.

Those of you who are thinking, “Hey. This is really algebra one.” well, welcome to my world. My kids learn a whole bunch of first year algebra in my algebra II and geometry classes. But I cover about 60% of the algebra II standards to kids with very weak skills, and the class is pretty conceptually interesting, I think. It’s definitely not just a rehash of algebra one.

I’ve also been thinking a lot about this post on curriculum mapping, which I found very interesting. I hope it’s okay that I borrow his image: 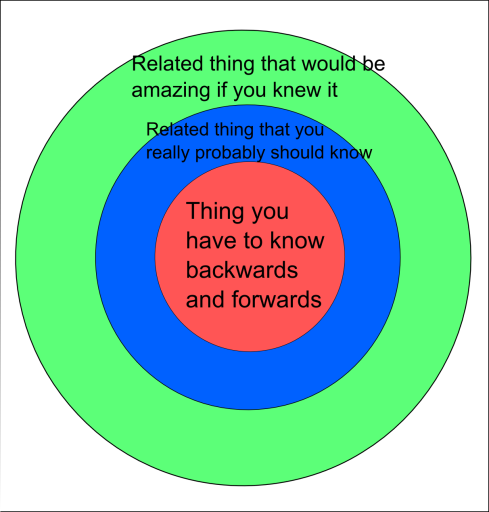 I was talking with Kelly Renier (@krenier), director at Viking New Tech, and we began discussing the concept of “power standards” or “enduring understandings” or “What are the Five Things you want your students to know when they leave your class?” then build out from there. However, we didn’t discuss building those Five (or whatever number) Things out into linearly progressing units, but rather concentric circles.

So this is absolutely how I teach, as regular readers may know. Teaching Algebra, or Banging Your Head with a Whiteboard covers, literally, the Five Big Ideas of algebra I. I also have them for geometry and algebra II (for my students, anyway). I thought the advantages of this approach were interesting in that I didn’t realize how many teachers don’t do this already. Again, quoting:

This is a really good explanation of what I see as the advantages to my approach. I have never taught in anything approaching a linear fashion, probably because I used CPM, which spirals as a matter of course, in my first two years and was nonetheless shocked at how much kids forgot. So once their forgetting is shoved in your face, it’s hard to go back to the linear curriculum design.

I don’t obsess with getting every single connection made from the first time I teach the class. Sometimes I’ll just acknowledge, as I’ve done with polynomial operations up to now, “Hey, this is kind of an odds and ends thing you just need to know.” There’s nothing wrong with making clean breaks between some units—it doesn’t automatically turn the curriculum linear. For example, I make a very clean break between quadratics and exponentials, because the kids have never seen exponentials before. I show the connections between linear and exponential functions, but I also don’t just lead in. NEON SIGN: NEW EQUATION is a helpful way for kids to realize they’re getting something new. (Common Core says they’ll be learning this in Algebra I. Jesus. These people are friggin’ delusional.)

Going back to who I am as a teacher, I start with explanations. Not necessarily verbal explanations every time, but making sense of a concept before doing it is an essential element of my teaching.

That doesn’t mean I start with a lecture, which I rarely do, or an explanation. I often begin a unit or a concept with an activity. But if I’m asking my students to engage in an activity with no concept or prior understanding, then they can be sure it’s going to be simple, straightforward, and illustrative.

Teacher and tutor END_OF_DOCUMENT_TOKEN_TO_BE_REPLACED
This entry was posted on Monday, August 12th, 2013 at 11:09 am and tagged with algebra II, curriculum, polynomials and posted in pedagogy. You can follow any responses to this entry through the RSS 2.0 feed.
« Dan Meyer and the Gatekeepers
My #FF list, or Ed Folks I Read »