I committed to making a big leap forward in inequalities this year. They’ve always been low priority in my curriculum, nothing more than a subset of equations, even though as a programmer, I can come up with fifteen real-life examples of working with them—much more than I can for linear equations. But once I kicked off linear equations with modeling, I could see some obvious introduction points that would help them fall into place. I committed the time to design some new lessons and build some new handouts. And I completely forgot to take pictures of the boardwork, dammit.

Back to tacos and burritos, but this time I took away the “spend all the money” constraint. Stan could either make the purchase or he couldn’t. I gave them some starting combinations to test, and then they came up with their own.

By this time, they are old hands at modeling and easily came up with more true and false pairs. I then graphed all the points on the board, using blue for “True” values, and red for “False”.

“See that space between the TRUE and FALSE values? You can see pretty clearly there’s a line separating them, like this:

“Take a second. What might that line be?” I’m pleased to see several hands shoot up, but I pick on Karl, slinking away from my glance up front. “Karl?”

“What if it wasn’t an inequality?”

“Yeah,” chimed in three other students.

“Yes, exactly. We are now working with linear inequalities, not linear equations. Solutions aren’t defined by a single point, but by entire regions. The line is the same in both equations and inequalities, but in an inequality, the line acts as a border between the TRUE and FALSE values. Everything on one side of the line is TRUE, and everything on the other is FALSE.”

From there, I give them one of the new handouts:

I’m really pleased with this one, as a first pass. The students plot the TRUE and FALSE values in different colors. Then they determine which of the linear inequality borders will correctly separate the regions. In one exercise, they become more familiar with solution regions, while also improving their ability to visualize lines from an equation (especially, god help me, positive and negative slopes).

Next, I give them a notes handout I’ve modified over the years.

as well as board notes a few days later: 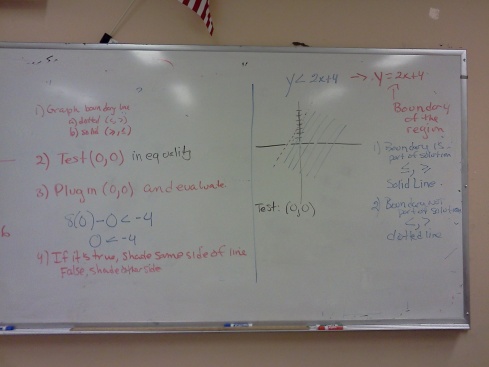 I made two HUGE changes this year from previous years, changes I suspect most math teachers will recognize.

First, I abandoned “above and below the line” test for the solution region. This seems so obvious to math teachers, but it’s really only meaningful to about half the students. Worse, the test only works with slope intercept form, and has no validity in standard form. The purple math link above tells the student to solve the equation for y—yeah, because solving inequalities is such a breeze, particularly with negatives. It’s a kluge. I didn’t even mention that test.

Instead, I had them use (0,0) for a test value and had them test the value for all forms. MUCH better. No “hey, remember the first way I taught you? Above and below the line? It doesn’t work in standard form, so here’s another way!” Testing values always works.

(Liam in the comments pointed out that the test value can’t be on the border, and I do cover this. I don’t put it in my notes, though. I used to, but the kids would get very confused at the caveat. So now I wait until they are confident of the (0,0) point test and then introduce an example in which the point is on the border equation. I’m discovering that it sometimes takes me a couple years through before I figure out the best way to create fully complete notes.)

I’m sure in later years I’ll further hone this, but this was the first time I felt good about my linear inequalities unit. From there, systems of inequalities was an obvious step: 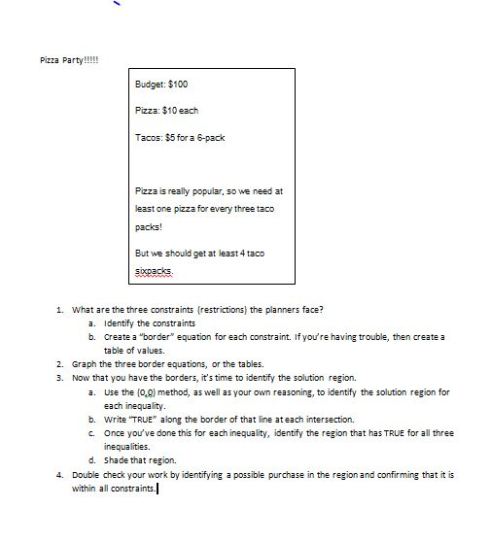 I did a day of modeling systems, but no, I didn’t go onto linear programming.. Instead, I moved onto practicing graphing without the models, and they did great.

I used one of my favorite worksheets as a quiz. The average grade was a B+. Check out this sample—see the “true” markings? By golly, they listened.

I was so emboldened by my success I went onto absolute values, which I usually only cover for tests. They did all right with that, too.

Teacher and tutor END_OF_DOCUMENT_TOKEN_TO_BE_REPLACED
This entry was posted on Monday, March 11th, 2013 at 8:49 am and tagged with linear equation modeling, linear inequalities and posted in math, pedagogy, teaching. You can follow any responses to this entry through the RSS 2.0 feed.
« Writing for free, but not as a Writer
KIPP Mathematica Study and Bragging Rights »