On John Quincy Adams and His Photograph

Of late there’s been notice that John Quincy Adams was photographed once or twice (the link is to Razib Khan’s thoughtful post). I’m not sure why the meme started; the picture has been around for decades. These articles seemed to have kicked off the trend.

The two original articles I read paid little attention to the man himself. 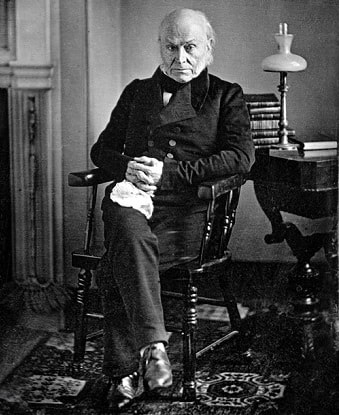 This is the man who authored the Monroe Doctrine declaring the US closed for settlement, who was probably the greatest Secretary of State in our history at a time when Sec of State was the second most important job in government. When Andrew Jackson overreached by invading Florida, Adams seized the opportunity to acquire the territory. When the US got involved in an ill-advised Second War for Independence and got mostly trounced, Adams negotiated the Treaty of Ghent, giving Britain next to nothing and keeping what the US had. This man, as both president and ex-President, strongly supported American nationalism and growth, but nonetheless had a relatively sympathetic policy towards native Americans and was one of the great early anti-slavery activists in Congress, routinely fighting the gag rule and, of course, defending the rights of African slaves in the Amistad case; both his opposition to slavery and his support of native Americans mark a profound difference from his much lionized successor, slaveowner and Cherokee remover Andrew Jackson.

Many who see the picture marvel that photography was around to capture a man with such a strong relationship to the founding fathers—how amazing it was that we have a picture of a man who knew Washington and Jefferson. One of the founding fathers was his dad, of course, and he knew many of the early leaders well. But arguably, he was a founding father, less than a decade younger than Alexander Hamilton. Washington—the man, not the city—considered him an extraordinary young diplomat after reading his series of articles in support of Washington’s Proclamation of Neutrality. Hamilton and Jefferson fought passionately over domestic policy and saw foreign affairs largely in terms of their own ideological preferences (not that this is a bad thing), while their boss listened and decided, usually in Hamilton’s favor. But neutrality was Washington’s own priority, one he developed from his own experience and values, decidedly rejecting both of his key advisers’ advice. That the first president appointed JQA to his first diplomatic position as US minister to the Netherlands on the strength of that series, read his letters home carefully, and used phrases from those dispatches in his Farewell Address speaks to Quincy Adams’ impact on early US foreign policy.

Like his father, JQA was a cranky misogynist and an unpopular but not necessarily terrible one-term president. He shared the founding fathers’ early vision of the country as a republic, in which an elite and well-informed minority undid the will of the impassioned people, hence his acquiescence to the original Corrupt Bargain.

He had a massive stroke in the House Chamber while voting against a resolution to award medals to Mexican-American War generals (he opposed the war and its treaty saying it would only exacerbate sectional tensions and lead to civil war, and by golly, he was right), dying two days later. Abraham Lincoln was part of the delegation escorting his body home to be buried in Massachusetts.

And while we’re mentioning photographs of people who knew the founding fathers, how about a shout out for this lady on the right? 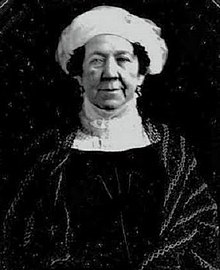 The socialite Dolly Madison carved the path for the ceremonial but none-the-less essential role for first lady, serving in that capacity for the widow Thomas Jefferson as well as for her husband James. While she didn’t personally cut down Washington’s portrait, she was unquestionably the person who identified it for rescue, along with a copy of the Declaration of Independence. She refused to leave Washington until the last minute when the British army was a few miles away, and rushed back to the city as soon as possible, understanding the importance of her symbolic presence.

Is there any tidbit of information in this Atlantic article or the Daily Mail piece even a tenth as interesting as any one of the facts I’ve outlined above? Both pieces are more interested in minutiae about the pebble in the man’s eye, and maybe a brief mention of hey, he knew the founding fathers!

Teacher and tutor END_OF_DOCUMENT_TOKEN_TO_BE_REPLACED
This entry was posted on Saturday, February 9th, 2013 at 7:47 pm and tagged with Adams Onis Treaty, Amistad, Andrew Jackson, Dolley Madison, George Washington, John Quincy Adams, Proclamation of Neutrality, Treaty of Ghent and posted in general, history. You can follow any responses to this entry through the RSS 2.0 feed.
« Spring 2013: These students aren’t really prepared, either.
Modeling Linear Equations, Part 3 »

6 responses to “On John Quincy Adams and His Photograph”