I’m teaching Geometry and Algebra II again, so I gave the same assessment and got these results, with the beginning scores from the previous semester: 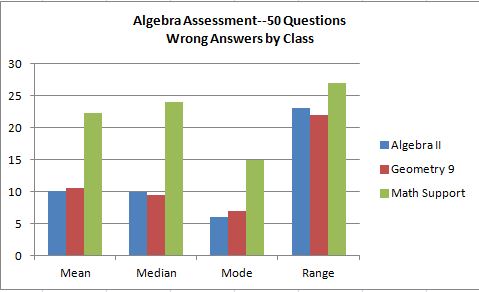 I’m teaching two algebra II classes, but their numbers were pretty close to identical—one class had the larger range and a lower mode—so I combined them.

The geometry averages are significantly lower than the fall freshmen only class, which isn’t surprising. Kids who move onto geometry from 8th grade algebra are more likely to be stronger math students, although (key plot point) in many schools, the difference between moving on and staying back in algebra come down to behavior, not math ability. At my last school, kids who didn’t score Proficient or Advanced had to take Algebra in 9th grade. I’d have included Basic kids in the “move-on” list as well. But sophomores who not only can’t factor or graph a line, but struggle with simple substition ought not to be in second year algebra. They should repeat algebra I freshman year, go onto geometry, and then take algebra II in junior year—at which point, they’d still be very weak in algebra, of course, but some would have benefited from that second year of first year.

Wait, what was my point? Oh, yeah–this geometry class class is 10-12, so the students took one or more years of high school algebra. Some of them will have just goofed around and flunked algebra despite perfectly adequate to good skills, but a good number will also be genuinely weak at math.

On the other hand, a number of them really enjoyed my first activity: visualizing intersecting planes, graphing 3-D points. I got far more samples from this class. I’ll put those in another post, also the precalc assessment.

I don’t know if my readers (I have an audience! whoo!) understand my intent in publishing these assessment results. In no way am I complaining about my students.

My point in a huge nutshell: how can math teachers be assessed on “value-added” when the testing instrument will not measure what the students needed to learn? Last semester, my students made tremendous gains in first year algebra knowledge. They also learned geometry and second year algebra, but over half my students in both classes will test Below Basic or Far Below Basic–just as they did the year before. My evaluation will faithfully record that my students made no progress—that they tested BB or FBB the year before, and test the same (or worse) now. I will get no credit for the huge gains they made in pre-algebra and algebra competency, because educational policy doesn’t recognize the existence of kids taking second year algebra despite being barely functional in pre-algebra.

1) These kids just had bad teachers who didn’t teach them anything, and in the Brave New World of Reform, these bad teachers won’t be able to ruin students’ lives;

2) These bad teachers just shuffled students who hadn’t learned onto the next class, and in the Brave New World of Reform, kids who can’t do the work won’t pass the class.

1) Well, truthfully, I think this response is moronic. But more politely, this answer requires willful belief in a delusional myth.

2) Fail 50-60% of kids who are forced to take math classes against their will? Seriously? This answer requires a willful refusal to think things through. Most high schools require a student to take and pass three years of math for graduation. Fail a kid just once, and the margin for error disappears. Fail twice and the kid can’t graduate. And in many states, the sequence must start with algebra—pre-algebra at best. So we are supposed to teach all students, regardless of ability, three years of increasingly abstract math and fail them if they don’t achieve basic proficiency. If, god save us, the country was ever stupid enough to go down this reformer path, the resulting bloodbath would end the policy in a year. We’re not talking the occasional malcontent, but over half of a graduating class in some schools—overwhelmingly, this policy impacts black and Hispanic students. But it’s okay. We’re just doing it for their own good, right? Await the disparate impact lawsuits—or, more likely, federal investigation and oversight.

Reformers faithfully hold out this hope: bad teachers are creating lazy students who could do the work but just don’t want to. Oh, yeah, and if we catch them in elementary school, they’ll be fine in high school.

It is to weep.

Teacher and tutor END_OF_DOCUMENT_TOKEN_TO_BE_REPLACED
This entry was posted on Thursday, January 31st, 2013 at 11:24 am and tagged with algebra II, geometry, math skills and posted in math, policy, reform, testing. You can follow any responses to this entry through the RSS 2.0 feed.
« A new year begins—midyear
On John Quincy Adams and His Photograph »

14 responses to “Spring 2013: These students aren’t really prepared, either.”