Day 4 part I: Recreating History
Students use their notes and documents from Day 3 to sketch the details of an Elizabethan era theater. Fishbowl discussion: what did they sketch for seats? What about curtains? What did “backstage” look like? How do historians “fill in the blanks” when they don’t have primary evidence to point them in the right direction?

After the discussion, students took a virtual tour of the Globe theater. How would someone go about establishing the source material and accuracy of this tour?

No deliverable here. I just wanted the kids to grasp the choices involved in recreating history, whether it be for a book, a movie, or simply an image. I thought something familiar and specific would give them a better idea of how many thousands of decisions are involved in filling in those blanks. And while I can offer no tangible proof that this worked, I can say that every student had that “aha” moment, when they realized how much they didn’t know, and how every decision in a recreation can further affect our general understanding of history. The discussions were active and everyone was engaged; we had some great exchanges. One of my delightful ditzes suddenly realized she couldn’t assume that there would be bathroom stalls.

“But….the plays could be hours. What would they do? Go back outside? What if they were way up front?”

“Maybe they had pots,” offered a classmate.

I broke in with a brief history of the chamberpots.

Another student’s eyes widened. “Hey, maybe that’s where the phrase comes from–they didn’t have a”

“pot to pee in!” the class choruses.

“What about the actors, though? They had to have at least one bathroom. They didn’t even need girls’ bathrooms, right?”

One of my top historians pointed out, “But look, they didn’t even have running water back then. Did they even have toilets?”

“When did they get toilets?”

I gave them the story of Thomas Crapper and ended the segment during the ensuing hilarity.

Underneath all the fun, they really did get an inkling of the challenges involved in understanding the past. And, of course, some potty jokes.

Day 4 part II: Sonnets
Lecture on the sonnet, including its history and the two major styles (Petrarchan and Shakespearean). Students listen to five sonnets written from Shakespearean to modern times, and write responses to each. They identify the link between one of the sonnets and a modern song.

I am not a cut-and-dried planner. I’d always known that this unit would have a sonnets lesson. I’d vaguely thought of them reading the poems, which seemed unsatisfactory but I figured something would occur to me. The “something” waited until 30 minutes before class time, when I suddenly realized how much the sound of the sonnets would add to the experience, and so spent a frenetic half hour hunting down them all (mostly on youtube).

After all that, though, it went beautifully.

Day 5 and 6: Shakespeare in Love

They got all the jokes. They didn’t giggle at the sex scenes. They were engrossed by the story. They enjoyed the movie, understood the movie, and were completely aware that enjoyment and understanding came from their new content knowledge. I could tell.

So if I have a disappointment, it’s only that I would have preferred they’d be blown away by the movie. I am a film propagandist who shows movies that students would never think of watching and are nonetheless enthralled. I’m very good at this, so when I could tell that they just enjoyed the movie, it felt like a letdown.

In retrospect, though, Shakespeare in Love isn’t really a propaganda film; I’d never deliberately try to sell it to early teens. In this case, it was curriculum. And from that perspective, it worked beautifully.

Note: My kids had all been approved for R-Rated films for health class. I doubt most teachers could get away with showing SiL to freshmen otherwise.

Day 7: Content Knowledge and Art
Students write an essay on this prompt: “To what extent did content knowledge help you appreciate Shakespeare in Love?”

In fact, I had seen the answer in their faces as they watched the movie, but I wanted them to think about it. 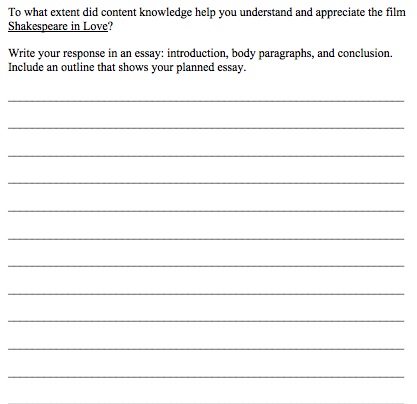 Teacher and tutor END_OF_DOCUMENT_TOKEN_TO_BE_REPLACED
This entry was posted on Tuesday, April 24th, 2012 at 8:13 am and tagged with Henslowe, humanities, Shakespeare, sonnets, teaching and posted in history, humanities, pedagogy, teaching. You can follow any responses to this entry through the RSS 2.0 feed.
« The Real Agenda
Closing out the year »