Like this text exchange with a freshman geometry student as he sent me an image of his homework, which was a simple right triangle trig task. I’d sketched two triangles, marked an angle on each, gave them three sides (a,b, and c) and asked them the sine, cosine, and tangent for each angle on each triangle.

Student: For both answers, the tan cos sine were the same angles.

Me: Yep! But the ratios were different.

Student: I don’t even know what I was solving for. Was it right?

Me: Does it matter if it’s right if you don’t know what you’re solving for?

Student: Of course it would matter. If it was right I could assume that what I did to come to that answer was correct.

Me: But if you knew what you were doing, you would not have to wonder. You would know why all the angles found for each identity were the same. And you would have an easier time with tests. Do you know what tan(52) means? That’s the big question.

Student: Don’t think you ever told me and when I asked you didn’t give me a straight answer.

Me: You wound me! I did give you a straight answer. I even brought the question up before the class because I thought it was so important and discussed it. But thanks to our conversation, I will revisit it tomorrow. I appreciate your questions and your honesty. Oh, in answer to your question, the tan(52) is the ratio of the opposite leg to an adjacent leg for a 52 degree angle in a right triangle.

When he asked me that question, I took it to the class and asked three students randomly, “what is a tangent”? Two were able to answer that it was a ratio; the third was able to somewhat explain what, exactly a ratio was.

This particular student is one much more interested in getting the right answer than in understanding the question or any part of it, but it’s still telling that he’s just going through the motions.

How do I get them to think of a trig ratio as a value, rather than just a step in a procedure?

So tomorrow, I’m going to post this diagram and question: 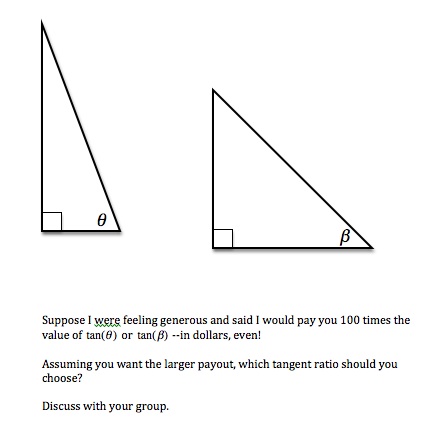 I have changed so dramatically on this point since I began teaching that it boggles the mind. I used to say that it was fine to teach the procedure—to teach the context, the meaning, of course, but if they didn’t get the meaning who cared, so long as they got the answer?

Believe me, I’d still hold to that position if the kids would get the answer. But consider the problems that I think any teacher would recognize:

That’s a short list. Slowly, I realized that kids who can learn and apply the formulas by rote are not the low ability kids, but close to the strongest in the class. The low ability students just seize on any formula they can remember and plug it in—and much of the time, they won’t remember any formula at all.

They feel better with formulas. When I work with students individually, I’ll prompt them for explanations of their understanding, while they roll their eyes and demand the formula so they can just plug it in. I’ve shut that down by telling them that they’ve been taught the formulas for the past four years, so if they don’t remember it by now why should I waste my time? (Yes, I’m a bit brutal.)

Of course, I teach the formulas. I love algorithms. I often outline methods step by step. I want them to be able to solve problems with the algorithms. But I remind them how useless the formulas can be by asking them questions that require understanding, not just answers.

I’d like to think this is helping their understanding and their long-term math ability. But if it isn’t, at least they are growing uncomfortably aware that the formulas and procedures aren’t as much good as they thought they were unless they take the time to understand the math itself.

And I know I have at least one ex-instructor who’s chortling in his beer at this confession.

I will report back.

Teacher and tutor END_OF_DOCUMENT_TOKEN_TO_BE_REPLACED
This entry was posted on Monday, March 5th, 2012 at 9:00 am and tagged with tangents, texting, trigonometry and posted in math, pedagogy, teaching. You can follow any responses to this entry through the RSS 2.0 feed.
« Just one more way we pay to play
Teaching Polynomials »

3 responses to “Texting on Tangents”